Premiere of the musical story La via de los sueños 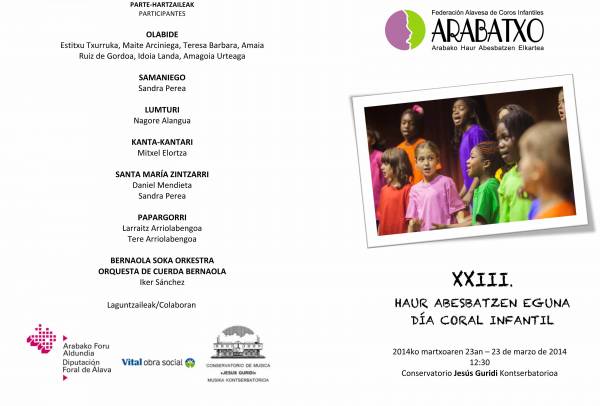 This coming weekend will be held the XXIII Choral Children Day organized by the Federation of Children’s Choirs of Alava, ARABATXO. This organization is composed of about 400 children in the province of Álava. The Federation emerged in 1991 with the idea of ​​promoting the activity of children’s choirs in the territory.

The choirs have been divided into 3 groups that work with the following guest teachers: Younger (5-10 years) with Josu Elberdin, medium (11-14 years) with Mireia Besora and older (15-18 years) with Aitor Biain.

For younger children, Arabatxo commissioned to Josu Elberdin the composition of a musical story: La vía de los sueños (The railway line of dreams). It’s a funny story about a magical world of dreams of a bored child.

Sing the work about 100 children and accompany them Bernaola Orchestra of Conservatoire Jesus Guridi, Gasteiz, with Josu Elberdin on the piano, and conducting all Iker Sánchez.

The concert will be on March 23 at 12:30 pm in the Auditorium of the Conservatory of Music Jesus Guridi, Gasteiz, Alava . 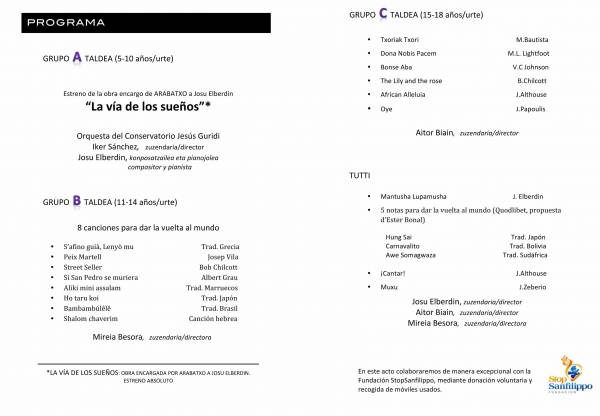