Since last May 21st the new ‘Leioako Herri Meza’, composed by Josu Elberdin is available for sale through a CD recorded by the Leioa’s San Juan Bautista Church Choir. 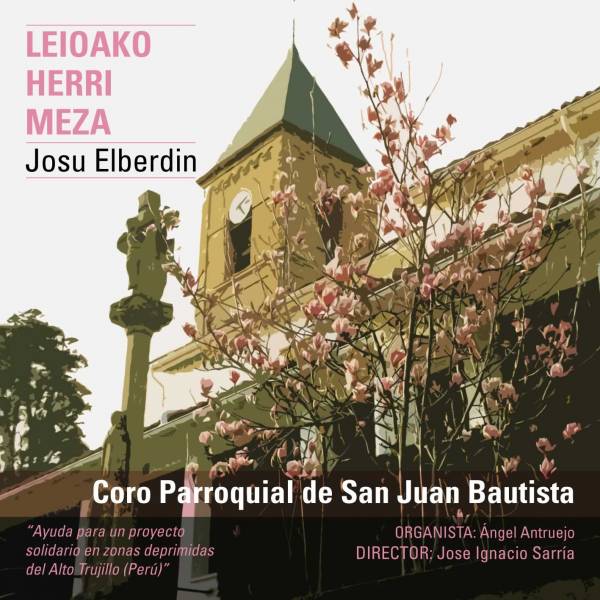 ‘Leioako Herri Meza’ was premiered last February 19th at San Juan Bautista Church, with Josu Elberdin acting as an organist, during a liturgical celebration directed by the Vizcaya Diocese Vicar General and being broadcast by EITB (Basque Public Television).

This Mass joins together the different parts sang by the Vicar, the congregation and the mixed voices choir. Leioako Herri Meza is the first Mass to be set in the Basque language (Euskera), both for mixed choir and congregation and includes all the parts which are sang during a solemn Mass, even those from different moments of the liturgical year. The composer shows in this wonderful score his special and characteristic musical style. It’s a deeply religious score where parts of great brightness and dynamism go together with others so intimate, recited parts. All these, always from a musical structure based on Basque music roots.

This recording is also a part of a solidary project, as all the proceeds from sales will go entirely to the construction of a hospital in areas of severe poverty in the region of Alto Trujillo (Peru).  The person in charge of the construction of this center in a location that still has no name (Barrio 1B) is Aitor Esteban, a missionary from Biscay. AltoTrujillois a town of about 65,000 population without public services as water, electricity, education…

This ‘Leioako Herri Meza’ CD is a present for music lovers, for the Christian community and also for those people who live in the area of Alto Trujillo. It can be purchased at a price of 10 € at San Juan Bautista, San Bartolomé and Leioa’s Lamiako Churchs, also at the Town Conservatory, at Leioa Kultur and also at some shops in the town.