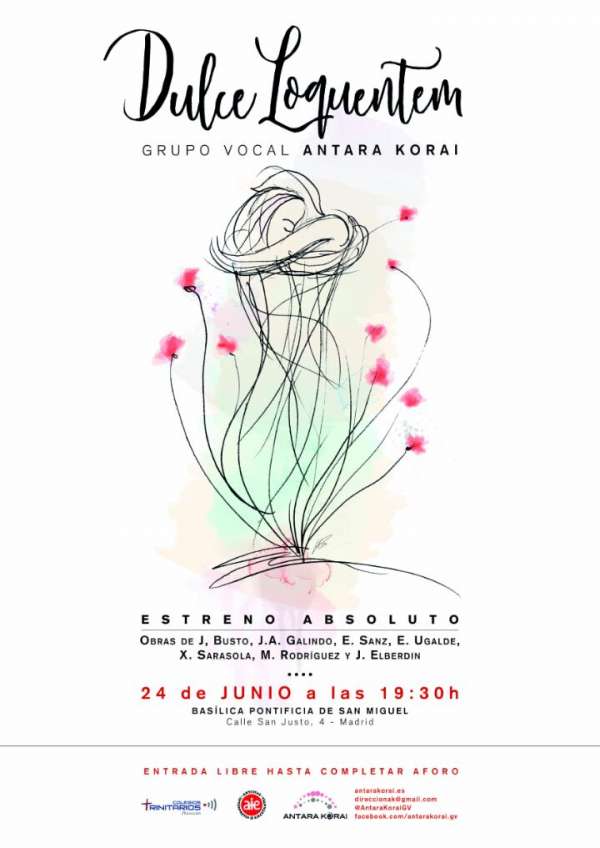 The Vocal Group Antara Korai has devoted all its efforts during this last year to they new project, “Dulce Loquentem”, a project that is born thanks to the illusion of wanting to embark on a new path and to do something totally new: the absolute premiere of seven works in one Same concert, composed by the most representative figures of the current Spanish choral scene.

The idea was born when Josu Elberdin created the work “Dulce Loquentem” (Five Poems of Love), commissioned by the director himself and dedicated in its entirety to the boys and girls who are part of Antara Korai.

“Dulce Loquentem” is a five-piece suite based on five classic love poems. Its author is Quinto Horacio Flaca, better known as Horacio, and they are all different from each other, which gives rise to five independent and unique pieces accompanied by different instrumentation in turn. Each movement gives life to a mood related to the feelings that arise in us when we fall in love, whether that first initial state of emotional drunkenness or even jealousy.

It is a unique musical program, made up of works of many different styles, with the theme of love as a common thread, which will offer the audience a wide range of colors, sensations and emotions.

The event will take place on June 24 at the Pontifical Basilica of San Miguel (Madrid) at 7:30 p.m. Free entry with voluntary contribution.