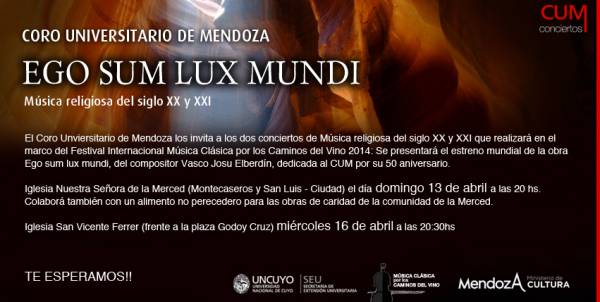 From 12 to 20 April 2014 will be held the International Classical Music Festival for the Wine Roads 2014 , organized by the Ministry of Tourism of Mendoza (Argentina), where renowned local, national and international performers will display their talents on stages located in warehouses, churches , heritage and tourist sites of Mendoza territory.

The second will be on WEDNESDAY, 16 at 20:30 pm at the Church of San Vicente Ferrer (vs. Godoy Cruz Plaza) where the new organism is present repertoire including works on first audition Calixto Alvarez and Morten Lauridsen.