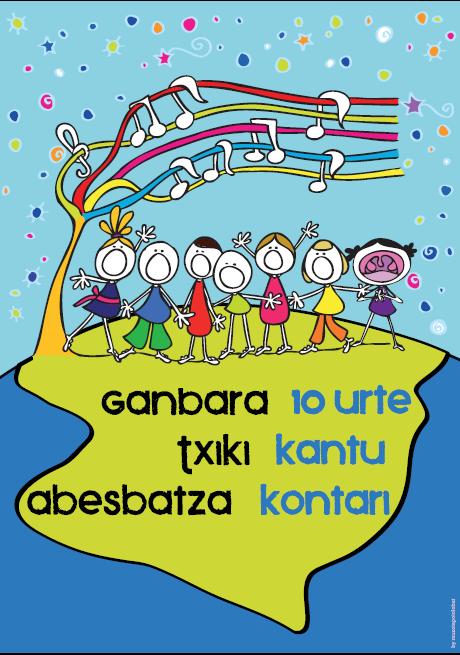 The choir Oñatiko Ganbara Txiki (OGA Txiki) celebrates its tenth anniversary. Conducted from the beginning by Aitor Biain, just record a disc and a DVD collecting the themes that have been significant in the history of the choir.

The most special song disc entitled Hamar, the same name as the album. It was commissioned for the writer Josune Lopez and the composer Josu Elberdin, choir friends from the beginning. It is a rhythmic and joyful theme, which was used to record a music video commemorating the anniversary and to be used for all activities that occur throughout the year.

The final anniversary party will be held on December 22, in the sports center of Oñate performing a macro concert whose title is 10 URTE KANTU Kontari: A trip full of music and color.

This celebration will include all groups belonging to choral association: Ganbara Txikitxoak, Ganbara Txiki, Gnbara Gazte, Oñatiko Ganbara Abesbatza and choirs and schools which are part of OGA. A trip in the time machine show us various important moments for the choir.

They premiered piece written by Elberdin and we can see the video they have recorded.

The concert will be on Sunday December 22, at 19 am at the Sports Center, Oñate.