World Premiere of The little flower by the Philippine Madrigal Singers

In October 1963, at the UP Abelardo Hall, the Madz launched its unique brand of music in a breakthrough performance.
On October 2013, exactly 50 years after, this time at the Tanghalang Nicanor Abelardo of the Cultural Center of the Philippines, we present a new era in our history, another event of “So Far, So Gold … The Madz’ 50th Anniversary Celebration”.

A performance that will usher in a new league of composers and arrangers … a promise of yet another groundbreaking mark on the world of choral music.

The Philippine Madrigal Singers is proud to present “PREMIERE“. This is a concert that the choir will premiere music commissioned especially for the occasion by composers from around the world.

Josu Elberdin wrote for them The Little Flower, a song in honor of St. Therese of the Child Jesus, dedicated to the choir and to the memory of the recently departed Ma’am Andrea Veneracion, founder and conductor of the choir for many years.

This is the program that will perform during the concert:
Part One

In memoriam by Eduardo Andres Malachevsky

The Little Flower by Josu Elberdin

Queen of the Night arr. by Ily Matthew Maniano

Have Thine Own Way by John Pamintuan

The concert will feature two performances: October 5, 8pm & Oct 6, 5pm at the CulturalCenter of the Philippines (CCP). 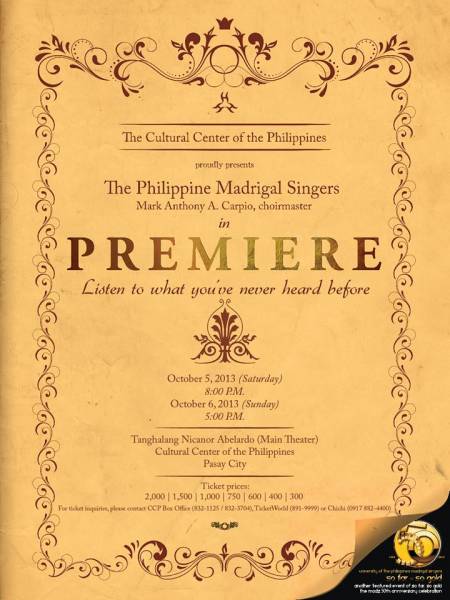